On Track for Improved Service 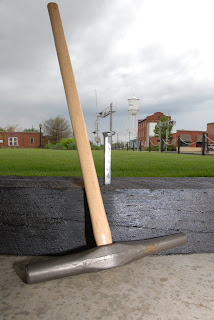 Even with the rain, Monday's ground breaking for the new California rail siding was a great event! So many passenger rail advocates worked hard to make this project a reality, and it will hopefully lead to more and larger improvements along the St. Louis to Kansas City corridor. We have heard loud and clear that people want better on-time performance, newer train equipment with more amenities (wireless access, food options, etc.) and more schedule options.

Posted by Laura Holloway at 11:51 AM No comments: Links to this post

In case you missed the ring toss ...
How long does it take a plastic milk container to decompose? (one million years!)
What is the maximum fine for littering along Missouri highways? ($1,000 and/or one year in jail)

Learn more about how MoDOT is Being Green.

Email ThisBlogThis!Share to TwitterShare to FacebookShare to Pinterest
Labels: Being Green, No MOre Trash

JEFFERSON CITY - The Missouri Department of Transportation marked a milestone today in its mission to fix 802 of the state's worst bridges in five years by reopening the first bridge repaired under the Safe & Sound Bridge Improvement Program.

This afternoon, MoDOT, Missouri Highways and Transportation Commission and county officials celebrated the rehabilitation of the bridge over Hominy Creek on Route AA north of Route 32 near the city of Halfway in Polk County. The bridge, which had been closed for repairs since Feb. 23, was reopened with a parade of vehicles representing critical services the bridge carries, such as emergency responders and school buses.

Two other Safe & Sound projects are also finishing up this week - one on Route 17 over Eleven Point River in Howell County and the other on Route F over Wolf Creek in St. Francois County. Missourians can track MoDOT's progress through an interactive map at www.modot.org/safeandsound.

"We made a commitment to Missourians that we would improve hundreds of the state's worst bridges, and we are delivering on that promise," said MoDOT Director Pete Rahn. "MoDOT is addressing more bridges than we ever have before thanks to the Safe & Sound initiative, as well as the normal bridge work scheduled in our five-year construction program, ongoing corridor work and now upcoming recovery act projects."

Immediately after the Missouri Highways and Transportation Commission approved the Safe & Sound program on Sept. 18, 2008, MoDOT went to work and was able to get the first bridges under construction within five months.

"Once we commit to a project, it's full steam ahead," Rahn said. "We went to work immediately to get 100 of these projects designed, placed out for bid, awarded and under construction in record time because Missourians simply deserve better bridges. Thanks to the cooperation of our consultant and contractor partners, dozens of these bridges are now under construction and will be fixed by the end of the year."

There are 248 rehabilitation projects being delivered through MoDOT's normal bidding process, with 109 under contract by June. Work on the remaining 139 bridges will be spread out over the next four years. Additionally, the Commission expects to select a team in May to award a single design-build contract for a package of 554 bridge replacements. Some of those bridges will be under construction this year, too. Most bridges will be closed to speed construction and reduce cost.

"I want to thank Missourians for their patience as we fix hundreds of bridges across the state," Rahn said. "There is no way around it, bridge closings are an inconvenience at best. However, there's no other way we can cost-effectively fix such a large number of bridges so quickly."

There are 10,249 bridges on Missouri's state highway system, the seventh largest total in the nation. Approximately 1,200 of them are in poor or serious condition. The Safe & Sound initiative will address many of these bridges. All 802 bridges will be complete by Oct. 31, 2014. The total cost of the program is estimated at $700 million.
Posted by Matt Hiebert at 2:50 PM No comments: Links to this post

JEFFERSON CITY - To draw attention to steps that can help eliminate senseless deaths and injuries at highway-rail crossings and on railroad tracks, April 12 - 18 will be celebrated as Rail Safety Week in Missouri. During this week, the Missouri Department of Transportation will join forces with the Missouri State Highway Patrol, Missouri Operation Lifesaver, railroad personnel and local law enforcement agencies to raise public awareness about railroad safety.

Positive enforcement events during Rail Safety Week will take place in Independence, Jefferson City and Kirkwood at the following times and locations:

Highway-rail crossing collisions were down significantly in Missouri in 2008, but it was still another deadly year, according to MoDOT. In 2008, the number of collisions at rail crossings dropped to 33 compared to 46 in 2007. Unfortunately, there were seven fatalities at railroad crossings last year - the same number of lives lost in 2007. Furthermore in 2008, at areas other than at crossings, 10 people were hit and killed and 7 were injured while walking illegally on railroad tracks or railroad property.

"Any rail-related injury or fatality is one too many, so we are combining various engineering, education and enforcement efforts to improve rail safety in Missouri," said Rod Massman, MODOT's railroad administrator. "While accidents at crossings for the most part are decreasing, railroad incidents in which people are struck while walking on the tracks are unfortunately on the rise.

Four people have already been killed while walking on the rails in 2009. We are very concerned with this trend, so we are working even harder to warn Missourians to stay off railroad tracks and, as always, use caution when driving over railroad crossings."

Volunteers and staff from the partnering agencies will share rail safety information and remind drivers to buckle up at the crossings listed above. However, all Missourians should remember the following safety tips at rail crossings and on railroad property:

· Cross tracks only at designated pedestrian or roadway crossings only.
· Never drive or walk around lowered gates - it's illegal and deadly.
· Never race a train to the crossing. It is closer and moving faster than you think.
· If your vehicle stalls on or too near the tracks, get out and move quickly away from the tracks in the direction the train is coming from.
· If you are at a multiple track crossing, watch out for a second train from either direction.
· Be aware that trains cannot stop quickly - it can take a freight train moving at 55 miles per hour a mile or more to stop.
· Do not walk on or over railroad property - this is trespassing!
· Do not hunt, fish or bungee jump from railroad bridges or trestles.
· Do not attempt to hop aboard railroad equipment at any time.

"On average, somewhere in the United States, a vehicle or pedestrian is struck by a train every two hours," said Rick Mooney, Missouri Operation Lifesaver director. "Operation Lifesaver has adopted a new slogan with a clear message intended to help eliminate rail tragedies: ‘Stay Off; Stay Away; and Stay Alive.'"

Counties with the highest number of incidents for the past four years have also been targeted for various education and enforcement actions this year.

So far, events are being planned starting in May and throughout the rest of 2009 for the city of St. Louis and the counties of Audrain, Franklin, Greene, Jackson, Jasper, Johnson, Monroe, St. Louis and Stoddard.
Groups interested in scheduling a free rail safety presentation can sign up online at www.showmeol.org/forms/presentation.htm.

For additional information, go to www.modot.org/othertransportation/rail/index.htm.
Posted by Matt Hiebert at 3:50 PM No comments: Links to this post

"Don't Barrel Through Work Zones" and Save Lives

JEFFERSON CITY - In work zone crashes everyone loses. Motorists are the ones most likely to be killed or injured in a work zone crash, and too often highway workers are hurt or killed as well. Work Zone Awareness Week is April 6-10, and the Missouri Department of Transportation is reminding drivers: don't barrel through work zones.

In 2008, 12 people were killed in work zones, an increase from 2007 when five people were killed. However, fewer people were injured with approximately 600 serious injuries in work zones in 2008, compared to 792 in 2007. Three MoDOT employees lost their lives on the job during 2008. Speed, inattention and tailgating are cited as the cause of most crashes in areas where roadwork is under way.

"We need drivers to pay attention to highway construction and drive with caution to prevent senseless deaths and injuries," said Pete Rahn, MoDOT director. "We're also asking the public to rate work zones they've driven through. That first-hand information will help us make adjustments and increase safety for motorists and our work crews."

MoDOT is also working to draw attention to work zone safety and honor its 128 fallen workers through Operation Orange, an initiative to turn significant state landmarks orange during the week.

In addition to MoDOT buildings statewide, other facilities that will be orange include: the Six Flags marquee, Busch Stadium home of the St. Louis Cardinals, the Boone County Courthouse, the Shelter Insurance Gardens in Columbia, Hammonds Field home of the Springfield Cardinals, the Bill Emerson Memorial Bridge and the Branson Landing. More information about Operation Orange can be found at www.modot.org/operationorange.

At a ceremony this evening at MoDOT's headquarters in Jefferson City, a sign will be unveiled marking the location of a future memorial honoring the men and women who have lost their lives improving Missouri's highway infrastructure.

Additionally, MoDOT will remind motorists of the need to drive safely in work zones around the state with radio and internet banner ads, as well as safety advertisements on fuel pump tops at various gas stations and messages on the department's changeable message boards.

The 2009 construction season will be filled with roadwork as MoDOT continues its Better Roads, Brighter Future program to improve 5,600 miles of roadways by 2011. There will also be an increase in work on bridges this year, thanks to the Safe & Sound Bridge Improvement Plan.

Additional projects will also be under way due to the American Recovery and Reinvestment Act.

For more information about construction projects statewide, look for work zone locations on MoDOT's interactive traveler information map at http://www.modot.org/ or call 888-ASK-MODOT (275-6636).
Posted by Matt Hiebert at 10:31 AM 3 comments: Links to this post