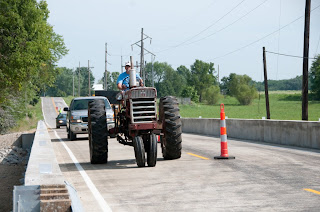 They say there is nothing like a satisfied customer.

MoDOT Interim Director Kevin Keith and members of the Safe & Sound bridge improvement team met three of them last week on a couple of new bridges on Route 127 in Pettis County, south of La Monte.
The two bridges that are just 1,000 feet apart had been been open for less than a week after a 66-day closure. KTU Constructors, MoDOT's design-build contractor for the Safe & Sound program, chose to utilize one road closure to build two new bridges. Their construction schedule called for an 81-day closure -- or roughly equivalent to the typical bridge replacement project.

Local farmers Charles Reavis and Roy Zeb Thomas and Pettis County Presiding Commissioner Rusty Kahrs couldn't have been happier. Reavis and Thomas both said that the communication with MoDOT prior to the start of construction allowed them to prepare for the closure period. Kahrs explained how important it is to enhance rural infrastructure to support an agriculture-based economy.

Their comments seemed to dovetail with other experiences around the state. It seems that people are willing to accept a little inconvenience to get a new bridge!


Posted by Bob Brendel at 3:03 PM No comments: Links to this post