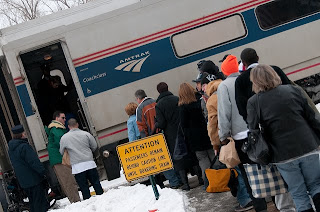 Reliable service and reasonable fares at a time of record-breaking winter weather and rising gas prices equal more Missourians choosing to travel by train. The number of passengers on Amtrak’s Missouri River Runner trains grew 13.3 percent in January compared to a year ago. In fact, ridership on the St. Louis to Kansas City corridor has grown every month, except one, since October 2009.

One factor that continues to help the Missouri River Runner draw customers is its on-time performance, which was at 90 percent in January. Another reason is its friendly service, which received a 92 percent customer satisfaction rate in December, the fourth best out of 27 Amtrak state-supported and other short distance routes.

Growth in ridership is good news. More passengers translate to more ticket revenues, which helps keep Missouri’s costs for this state-supported service down.

The capacity and reliability of this service will continue to improve as Missouri takes on more rail improvement projects this year with funding received from the Federal Railroad Administration. Plus, many communities along the rail corridor are showing their support with station improvement projects. Altogether these improvements make the train an even more viable alternative transportation option for Missourians

So, when was the last time you rode the train? Get on board and see why more people are choosing the Missouri River Runner.
Posted by Kristi Jamison at 12:13 PM 5 comments: Links to this post