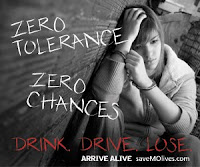 The day I got my license was an exciting day for me. It opened up a whole new world: nights out, trips with friends, part-time jobs, independence.

But it wasn't all friends, fun and freedom. With my license also came responsibility. Sure it took me two speeding tickets to figure that out but I did - eventually.

Getting your license isn't a right - it's a privilege. One that comes with strings attached. One of those strings is don't drink and drive.

Between 2008 and 2010, 98 people were killed and 426 seriously injured on Missouri roadways in crashes involving a drunk drivers under the age of 21. What's tragic about these crashes is they are clearly preventable.

It is illegal for a person under 21 to possess or consume alcohol in Missouri. Missouri has a zero tolerance law. If you're under 21, your license will be suspended if you're caught with even a trace of alcohol in your system.

With prom and graduation season here, Missouri youth have much to celebrate. From May 4-13, high-visibility enforcement and education will remind teens and their parents that underage drinking is not only wrong - it's against the law.