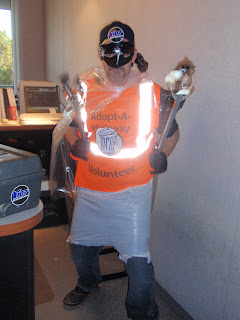 Have you seen this superhero alongside the road picking up trash? It’s Trash Man – better known as Cosmo from the Cosmo & JC show on Y107. He’s the best kind of super hero – the kind that keeps our roadsides cleaner and more attractive.

Trash Man picked up trash this morning along Highway 63 north of the AC/Grindstone exit. His “trashy” superhero costume consisted of a cape, suit and mask all made from trash bags.

I provided him with trash bags, a safety vest, gloves and a grabber and we went to work. In less than a half hour, we had already filled up a yellow trash bag. Some of the things we found: floss, lip gloss, a rubber glove and wallpaper along with tons of fast food trash, cigarette butts and paper.

Trash Man isn’t the only superhero out there picking up trash. MoDOT’s Adopt-a-Highway program currently has 4,140 adopter groups that clean up 5,872 miles of highway. Adopters perform about $1 million a year in litter cleanup and beautification efforts. The stretch of highway we picked up today was adopted by Evan Scholars at the University of Missouri.

To find out more about Adopt-a-Highway, call our toll free number at 888-ASK MODOT (275-6636) and ask for the Adopt-A-Highway coordinator or email us at aah@modot.mo.gov. You can also find out more information at www.nomoretrash.org.

Posted by Revee White at 3:00 PM No comments: Links to this post

Email ThisBlogThis!Share to TwitterShare to FacebookShare to Pinterest
Labels: Adopt-A-Highway

One hundred and counting! That’s the number of bridges the Missouri Department of Transportation has now fixed as a part of its commitment under the Safe & Sound Bridge Improvement Program – an initiative to fix 802 of the state’s worst bridges in five years.


This morning Gov. Jay Nixon joined MoDOT Director Pete Rahn, members of the Missouri Highways and Transportation Commission and local officials to celebrate the completion of a redeck project on the Route E bridge in Platte County over the Platte River. It was the 100th bridge completed since April when it reopened on October 24.


MoDOT and its contractor partners are working so fast on these projects that already seven more have been completed! There are another 13 under construction that will be completed before the end of the year. Since the first bridge was completed on April 23, 107 bridges have been improved in 194 days.


But if you think opening a bridge about every two days is impressive, wait until next year! In 2010, close to 250 bridges will be constructed. And almost 200 of those will be completely new bridges, built under the Design-Build portion of the Safe & Sound program by KTU Constructors.


Construction schedules are being completed, and MoDOT will be conducting community briefings through the winter months to provide construction and detour information while these bridges are closed.


The contract with KTU Constructors requires that the average closure be no more than 45 days. That's twice as fast as the normal 90 days it takes to build a new bridge.
Posted by Bob Brendel at 11:45 AM No comments: Links to this post