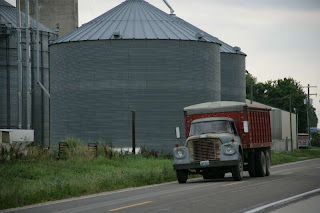 Race fans – if you like thrilling, high-stakes adventure, keep an eye on Missouri row crop farmers this month.

We’ve finally caught a break in the weather and in some areas, fields are starting to dry enough that harvest can begin. October’s monsoons kept combines and other machinery out of fields so, as a state, we’re waaaay behind. As my uncle used to say, “Those beans won’t pick themselves!”

Picking and harvesting is one thing. Farmers have to get food from the field to storage. That’s where MoDOT comes in. At the request of the Missouri Department of Agriculture, MoDOT issued emergency declarations that ease certain state transportation regulations through Nov. 30. While the declarations are in effect, farmers and other motor carriers are allowed to load their trucks up to 10 percent heavier than the legal licensed weight when transporting row crop commodities from the farm to a storage facility and from one storage facility to another. Those responding to the emergency may also operate their vehicles beyond the normal hours-of-service limits when hauling to storage facilities and returning the empty truck to the farm.

These heavier loads are not allowed on Missouri interstates, nor are they allowed on any bridge with a weight restriction lower than the gross weight of the loaded vehicle. When traveling over bridges, the drivers must limit their speed to 45 mph and drive down the center of two lanes.

Soooooo, if you see a truck running down the middle of a bridge, they’re not in distress or practicing their NASCAR blocking moves. They’re likely full of corn or beans and following the requirements of the declaration – unless they’ve painted a number on the door of their cab…

(A copy of Emergency Declaration 09-12 must be carried in each commercial motor vehicle that operates in response to the relief effort. Farmers must carry either 09-12 or 09-11. Both are posted on MoDOT Motor Carrier Services' Web site, www.modot.org/mcs.)
Posted by DeAnne Rickabaugh at 3:42 PM No comments: Links to this post