They Weevil and They Wobble 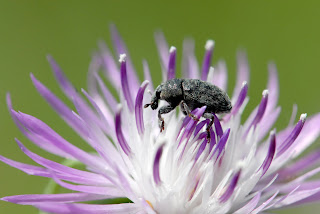 The weevils have a job to do in Missouri, and they're working hard to earn their keep.

Over the last couple of years, MoDOT has teamed up with the Missouri Department of Conservation and the University of Missouri-Extension, working towards the best solution for an increase in spotted knapweed along roadsides. Don't let the pretty purple flowers fool you -- left unchecked, the knapweed takes over, creating an herbicide that kills plants around it. Overall, it's not the friendliest of neighbors.
Enter the weevil. Used in other parts of the country for decades and known to focus only on knapweed, these little guys have been put to work. Over the summer, they were released in 75 sites around the state, mostly in southern Missouri.
Rand Swanigan, roadside management specialist, finds it a very positive way to go.
"It's not a cure-all, but it allows mother nature to help us control this weed in an environmentally friendly way," said Swanigan.
That, and the weevils get a free lunch.
Posted by Laura Holloway at 3:09 PM