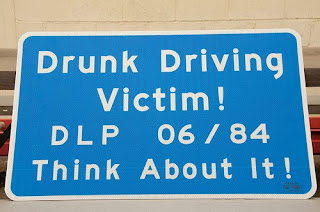 I’ve never lost a friend or loved one in a traffic crash, so I can only imagine the heartbreak involved. Add to that a senseless and preventable death due to an impaired driver and it’s absolutely heartbreaking.

Well, now families of drunk-driving victims can memorialize their loved ones with signs along our highways. Not only does this offer families a chance to remember their loved ones, but a way to send a message to others about the dangers of impaired driving.

The blue memorial signs read "Drunk Driving Victim" and include the person's initials and the month and year they were killed. At the bottom it reads "Think About It." The signs can be requested and paid for by the family of a drunk-driving victim.

The signs are the result of a new law called, David’s Law. Twenty-six years ago, David Poenicke was 19 when he was killed on his way home from a Cardinals baseball game. He pulled his motorcycle over to the shoulder of I-270 when a passing car struck him and his motorcycle. The driver had a blood alcohol level of 0.14 and was charged with manslaughter and vehicular injury. The first sign from the new program was installed today on Interstate 270 in Florissant in his honor.

Impaired driving continues to be a problem in Missouri. In 2009, 280 people were killed in our state, 1,140 seriously injured and 3,719 received minor injuries in crashes involving an impaired driver. Hopefully these new signs help get people to think twice before driving impaired.

Applications for the memorial signs are available on MoDOT’s website.
Posted by Melissa Black at 3:47 PM

This signs will help remember people the cause of their death. Wake up call for irresponsible driver's. Authorities should have strict implementation about DUI. For more information and legal advice we can ask help from DUI lawyers.