What Part Don’t You Understand?

School is back in session and a hint of fall is in the air. With that comes those first few exciting weeks of school and, of course, big weekend plans.
I grew up in a small rural town. As a teen we had our local buyer, you know, that guy in his mid twenties that still cruised by the high school during class time, ever so slowly to make sure that everyone knew he didn’t have to go to school. I don’t think he had a job either, but anyway, he was the town buyer.
Slip him enough for a six pack for himself and he’d buy you whatever you want.
Weekends were then spent in a field or on a dirt road drinking ourselves into a stupor on Boone’s Farm Strawberry Hill, or whatever else we could afford.
We never gave a thought as to how we would get home. Usually the one that drank the least would get behind the wheel.  We would take the back roads, coast the car down the hill to the house and park it, stagger indoors and pass out. We just didn’t think about a DWI or minor in possession, let alone a car crash, serious injuries or death.
It’s much different today. The word is out and everyone knows that drinking and driving is a deadly combination.
So let’s face it, you know the risk and you know the consequences. 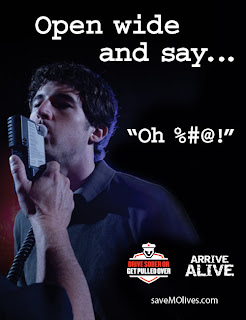 Missouri has a Zero Tolerance Law. If you are under age 21, your license will be suspended if you’re caught driving with even a trace of alcohol in your system. If you cause a fatal crash while intoxicated, you can be charged with involuntary manslaughter, a felony resulting in up to seven years of jail time, a $5,000 fine or both.
In 2011, 218 people died and 867 were seriously injured in crashes involving an impaired driver.  Missouri takes this seriously. What part of Drive Sober or Get Pulled Over don’t you understand?  ARRIVE ALIVE.
Posted by Kelly Jackson at 2:55 PM

Email ThisBlogThis!Share to TwitterShare to FacebookShare to Pinterest
Labels: arrive alive, Drive sober or get pulled over, impaired driving, savemolives

You know, this goes for adults too. Having been single in the big city of Dallas for a few years, I have had a lot of friends who don't think twice about this either. It's just not worth the risk of death or injury to yourself or others - it's also VERY EXPENSIVE when you consider fines, court, attorneys, license issues, getting to work without a license. It's not worth the headache.

We go to lots of concerts and events and we either get a hotel nearby or a taxi home if they serve alcohol. Whether we drink or not, the guy leaving behind us could have had too much to drink!