The Wheelies Are Optional 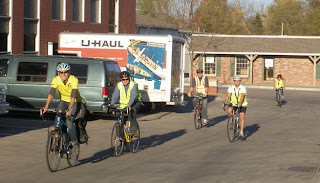 It isn’t every day that your job requires you to wear a bike helmet, but on Nov. 8, staff from MoDOT’s Kansas City office wore their helmets with pride as they rode through town on two wheels as part of a workshop for transportation planners and engineers on “Understanding a Cyclists Perspective.”


Hosted by the Missouri Bicycle and Pedestrian Federation, the six-hour seminar introduced staff to the physical, mental and agility challenges of actually maneuvering a bicycle through active traffic. The agenda included classroom and hands-on sessions and covered:
·         Benefits of cycling
·         Principles of traffic law
·         Lane choice and position
·         Bicycle crashes
·         Sharing the road
·         Bike handling skills and urban practice ride
The concept of the workshop was developed as part MoBikeFed’s effort to form a new KC regional bike and pedestrian advocacy organization.
“This organization will partially focus its time and resources on bicycling and pedestrian education. A hallmark of this education will be to offer it to transportation staff and elected officials throughout the Kansas City region,” Said Eric Bunch, program coordinator for the Missouri Bicycle and Pedestrian Federation.  “Before we take the program to a bigger audience we needed to get feedback from the experts. MoDOT District 4 has been a great supporter of bicycling in the Kansas City area, but as advocates, we realized that we could help MoDOT staff gain a better perspective of how our built environment works for cyclists.”
This was the inaugural run for “Understanding a Cyclist's Perspective” but the workshop borrows elements from a program offered to the public called Traffic Skills 101. MoBikeFed hopes in the future to offer this workshop as a continuing education credit option for planners and engineers.
While most of the class was held in classroom session, the team did enjoy an hour-long bike ride through Lee’s Summit, Mo.’s urban streets.
I have always considered myself to be an experienced cyclist.  I have ridden my bike in urban, suburban and rural settings on roads, trails and even sidewalks,” said MoDOT Construction and Materials Engineer Perry Allen. “The training provided me what I need to know to ride safely and legally, especially in an urban and suburban setting. I found the class to be very informative and beneficial increasing both my interest, as well as my confidence as a cyclist.”
The workshop is open to other groups and organizations. Contact Eric at 573.701.2492 or Eric.Bunch@mobikefed.org for details.
Posted by Laura Holloway at 4:08 PM

This is great that you have done this. I wish more transportation departments would do this and get to understand what it is like to try to use a bicycle as real transportation.