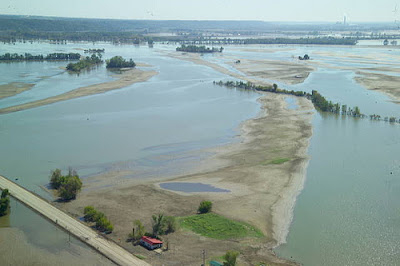 The Flood of 2011 has been like nothing any other Missouri River states have ever experienced.  Unlike other historic floods which rose and fell within weeks, this time the water flowed continuously over -- and in many cases under -- the Northwest and Kansas City Area Districts' highways for months. Entire sections of shoulder, pavement and foundation washed away in some areas.

Now, we're working to get flooded routes open as quickly and safely as possible by the end of 2011.

One of the first big steps began Wednesday with the start of emergency contract repairs in Atchison County on Route 136. This is the first of a two-phase project that will be necessary to restore access completely across Route 136 where four large gaps exist. Three of the gaps should be fixed by October 15. The fourth gap is a 600-foot scour hole, but damages cannot be assessed until waters recede.


"We are committed to doing everything possible to get these roads opened as quickly and safely as possible for Missourians," said Don Wichern, MoDOT's Northwest District engineer. "In some areas we are still waiting for waters to recede, but we are spending every available minute planning how to repair and reopen these roads so we can all move forward."
Posted by Laura Holloway at 3:38 PM